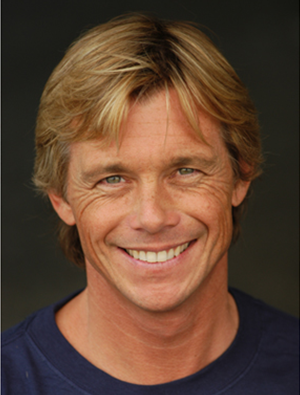 Christopher Atkins was nominated for a Golden Globe for his debut performance opposite Brooke Shields in the worldwide blockbuster film, The Blue Lagoon. Chris went on to star in over fifty film and television projects including — A Night in Heaven with Lesley Anne Warren and The Pirate Movie with Kristy McNichol — both for Twentieth Century Fox. On Dallas, he caused controversy playing opposite Linda Gray as Sue Ellen’s young lover Peter Richards.

Chris is an accomplished screenwriter and producer. He has traveled around the world and has received a patent for one of his inventions. Born and raised in Rye, New York, as a child Chris raced sailboats on Long Island Sound and learned to scuba dive and of course is an avid fisherman.

It was his love for the water that landed him the starring role in The Blue Lagoon and motivated Chris to write his latest screenplay Feathering the Wind, a coming of age family film set in the world of competitive sailing. He recently finished directing the short film A Man with a Child in His Eyes.