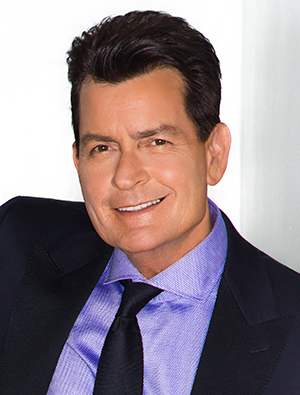 Sheen became known to television audiences through his Golden Globe® Award-winning lead role in Spin City. In 2003, Sheen was cast as “Charlie Harper” in the CBS sitcom Two and a Half Men, which was loosely based on Sheen’s bad boy image. The role garnered him an ALMA Award and four Emmy® Award nominations, as well as two Golden Globe Award nominations for Outstanding Actor in a Comedy Series.

In 2011, Sheen set a new Guinness World Record for Twitter as the “Fastest Time to Reach 1 Million Followers,” adding an average of 129,000 new followers per day.

Later that year, Sheen kicked off his North American “My Violent Torpedo of Truth/Defeat Is Not An Option” tour, which sold out in 18 minutes to set a Ticketmaster record.

In September of 2011, Comedy Central’s Roast of Charlie Sheen was watched by 6.4 million people, making it the highest-rated roast in the history of the network.

Sheen finished that year starring in the Roman Coppola movie, A Glimpse Inside the Mind of Charles Swan III and in 2013 starred as Mr. President in Machete Kills.

In June 2012, Sheen debuted his new comedy TV series on FX, Anger Management. The show was a huge success and ran for 100 episodes.